ITMediaLaw – Rechtsanwalt Marian Härtel
Home Esport and politics Tfue vs. FaZe: What does German law say about this?
Content Hide
1 Tfue vs. FaZe on everyone’s mouth
2 US law vs. German law
3 Why the lawsuit?
4 Taking FaZe
5 Talent agency?
6 Is there a contract?
7 Honourable contract?
8 Competition exclusion clauses
9 Competition law
10 Cash payments are also in dispute
11 Usual remuneration?
12 Breach of contract by FaZe?
13 Fiduciary claim
14 What happens next?

Tfue vs. FaZe on everyone’s mouth

The subject of Tfue’s lawsuit against FaZe (I wrote briefly about it in this post) seems to be just not getting dead and it keeps boiling up. Of course, other players and streamers are also taking advantage of the moment (although nothing has yet been decided in court) and lawyers in the US are further fueling the discussion. Some even claim that the lawsuit could completely change esport. There may be something about it, and if only because of the great discussion and notoriety. Even though I am convinced that esport, and at the very top of esport in Germany, still has a long way to go and should change, must become professionalised and perhaps also be fairer, the matter is of course ultimately a matter of course. a question of American law. It is therefore hardly possible to transfer the whole thing to other legal systems, even though I am increasingly confronted with the problem that esport, especially in the professional field, is very international when drawing up player contracts.

US law vs. German law

Despite the fact that the legal issues of the case are difficult to transfer to German law, which is due to the fact that in the USA so-called “case-law” applies and many basic concepts are different from those in continental Europe, I wanted to have fun, and briefly evaluate how the action would be assessed under German law.

Much of the debate on Twitter and Reddit in recent weeks has sparked fierce debate about why the lawsuit occurred in the first place. The reason, however, is probably mainly the greatly increased awareness of Tfue, which led to the fact that he is no longer happy with the distribution of the revenue from his cooperation agreement with FaZe, which is also supposed to tie him to FaZe for three years. Such a long contract term is a circumstance that may not be in line with German law, since GTC law in Germany would prohibit such a term and the vast majority of player contracts will have to be regarded as GTC. I wrote about this in this detailed article. This is probably also true of the fact that the fixed salary of the contract only contributes 2,000.00 US dollars. 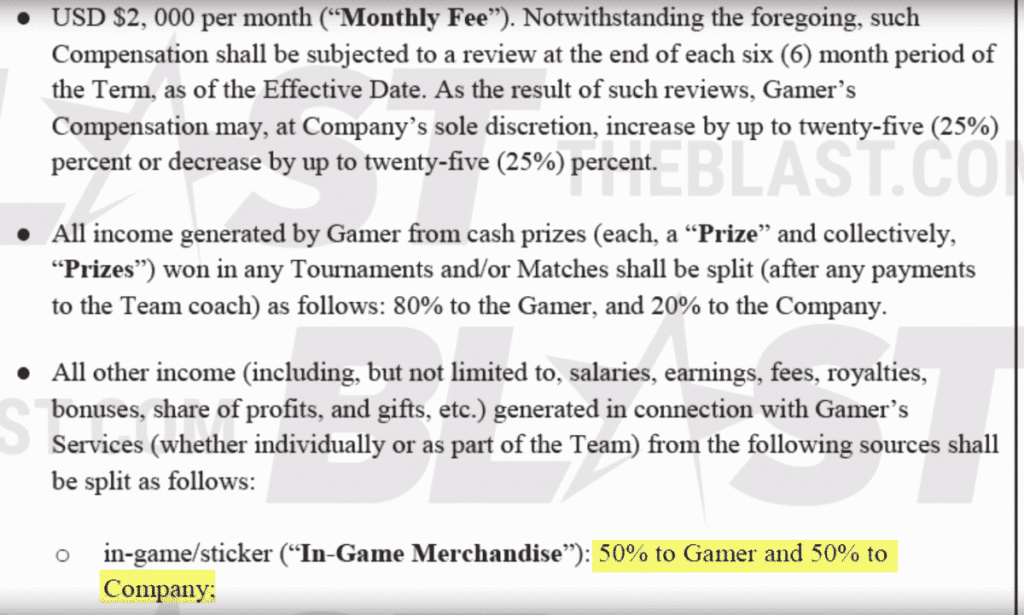 In addition, FaZe is to receive up to 80 of the revenue from brand advertising deals. Tfue describes himself as an “idiot” that he has signed such a long contract. But is this a problem apart from the above-mentioned GTC problem?

While Tfue’s approach to the fact that FaZe is an unlicensed talent agency for which there is currently no equivalent in Germany (from the problem with transfer fees such as in this article and This article, apart from this, I will try to analyze the seven basis of the claim of the regular lawsuit under German law.

Is there a contract?

The first claim,‘Declatratory judgment that the contract is void’, would correspond in Germany to an action for a declaration that there was no contractual relationship between the parties, never existed or no longer existed. However, since Tfue has signed a contract and there is no evidence that it may not have been fit for business, had a so-called reason for challenge (e.g. because he was fraudulently deceived) or that the signature was not genuine, this would be Germany probably not crowned with success. What else could only apply with regard to the circumstances regarding GTC law in the German Civil Code (BGB), the term of the contract and/or the validity of individual contractual clauses in relation to the evaluations of Sections 305-310 of the German Civil Code (BGB). It is true that an action for performance (e.g. to pay money) always takes precedence over an action for a declaration. In this case, however, there may well well be the necessary interest in finding in Germany in order to enable such an action to be brought. This also applies in accordance with Tfue’s requests to the Court to find that the contract was allegedly broken by FaZe in the past, as sponsorship funds and the like were not distributed adequately. Here, however, it depends on the exact wording and the interest, since the demand to receive money from the team according to the contract would have priority.

In the same direction, Tfue’s second demand for a “Declatory judgement that the contract violates the business and professions code” whereby here too in Germany it would have to be determined cleanly whether there is an interest in finding or whether it is possible that either GTC law and/or the basic principles of commercial law (as these are regulated in Germany, for example, in the Commercial Code) have been violated. In Germany, too, there is the principle that everyone has the right and the freedom to choose their own job. This right has constitutional status and can only be restricted by weighing up the rights of employers. Such a balance would then require in-depth examination and comparison of contract terms, notice periods and income. For professional sport, there are a few judgments in Germany. Last year, for example, the Federal Labour Court ruled that the limitation of employment contracts with licensed players of the Bundesliga was regularly due to the specific nature of the license player’s work performance in accordance with Section 14 para. 1 sentence 2 no. 4 TzBfG is justified. As far as I know, the inverted case, i.e. how long may the duration and notice periods be, has not yet been decided for professional sport and certainly not for esports. However, there are extensive legal opinions on the subject, but I do not want to go into this. However, a term of three years, without any notice period, is probably not permissible under German labour law either.

Incidentally, the procedure also concerns competition clauses which are hardly enforceable in the USA and which are regularly only effective in Germany with high severance payments. A clause stating that someone may not play for another team after termination without the person who receives significant compensation for this has no effect in this country either. Whether such a competition clause is also possible during the actual term of the contract is likely to depend regularly on whether there is an employment contract or whether there is only one cooperation/advertising contract and have different stringent requirements depending on the situation. Perhaps this contribution is interesting.

if all other conditions are met, but in Germany it would also result from a general claim for damages.

Cash payments are also in dispute

The fourth claim basis “Any money that FaZe Clan collected from sponsorship deals not given to Tfue” is probably best compared with a regular entitlement to benefits from a contract. If I have claims against the team, then of course I can sue them and if I need information on how much the team has earned, then this would be feasible with a so-called step-by-step lawsuit, which essentially provides information first and then performance. Desires. Well-made contracts include information claims and possibly even audit clauses, i.e. rules whereby, for example, an auditor can control the team’s revenues. If such a thing does not exist, however, attenuated claims could result from contractual ancillary obligations.

Tfue’s 5th claim, the “Quantum Merit”, is best compared in Germany with the “usual remuneration” that exists in the service law. However, it is necessary to ensure that clear rules are of course applied, so that the usual remuneration can only replace an explicit regulation in large exceptional cases, also because of the ‘Pacta sunt servanda’ principle mentioned above. There are only a few exceptions, for example in the form of the minimum wage or when a consideration is not or unclearly regulated. Even in cases where a 100 performance-based remuneration is provided for, consideration could be given to the application of the usual remuneration if the contract would otherwise be highly unfair to one of the parties. However, such a claim could also become interesting or relevant in Germany if there are basics, which is why a contract might have been ineffective from the outset. In such a case, the player would have no contractual claims – more – against the team and the way for the usual remuneration would be free. Only in copyright law is there a regulation for rebate in Section 32a of the UrhG. Copyright could be used in the case of streamers if their services are so artistic in nature that the marketing contract and the consideration constitute exploitation and additionally constitute a gross disproportion. However, I am not aware of any judgments or essays in Germany. However, I will soon be dedicating myself to this subject in a separate article.

Breach of contract by FaZe?

The 6th claim in the US lawsuit is “Breach of written contract” so breach of contract. This, of course, finds a match in Germany. The effects in Germany would be either the possibility of a declaratory action, but rather the exercise of a right of termination, which in bad cases may also be possible unwritten. This, of course, may also result in the team being liable for damages in Germany.

The 7th and final claim in the case of Tfue vs. Faze Clan is“Breach of fiduciary duty”. The German translation corresponds to the duty of a trustee and concerns in this country the obligation to store and/or transfer the money or assets of another. This can of course also be the case for talent agencies, which are very large in the FIFA area, including in Germany. If an agency takes money FOR the player, the player must secure and transfer the money properly. The question of whether tournament wins are the player or the team is a question of player contracts, but also of the requirements of tournament providers and game providers. Last but not least, there are also numerous tax problems that should not be underestimated both as an esport team and as a player. More information about this problem area can be found in this article.

I do not wish to comment on the prospects for success of the US lawsuit. This does not bring any of my readers and/or clients any further. What is clear, however, is that it is important that esport develops to ensure that not only are proper contracts finally made and teams take longer to take the risk of being in the liability trap or even in prison with one leg, but also that fairness in esport is also is making its way in.

For further questions and/or comments I am always available!